Cation vs. Anion: Differences and Examples

The word ion is derived from an ancient Greek word ἰόν meaning “going”. In 1834, English chemist Michael Faraday introduced the term ion (suggested by William Whewell), which moves in an aqueous medium from one electrode to the other.

In 1884, Svante Arrhenius published his thesis on “Recherches sur la conductibilité gavanique des électrolytes” (Investigations on the galvanic conductivity of electrolytes). He explained the fact that solid crystalline salt dissociates into its ions. He won the 1903 Nobel prize in chemistry for this explanation.

Difference between cation and anion

Let us take an example of sodium (Na+)

The electronic configuration of sodium is:

By electronic configuration, there are two possibilities for sodium (Na) atom to gain stability. The first one is that it can accept 7 electrons and complete its octet, which is not feasible. The second one is that it can just release one electron from the valence shell (3rd shell) and gain a noble gas configuration. So, it is convenient for sodium (Na) and other similar metals to lose their electrons to become stable.

Electronic configuration of sodium ion is:

Let us take an example of chlorine (Cl–)

The electronic configuration of chlorine atom (Cl) is:

The electronic configuration (E.C) of chlorine (Cl) shows that there are two possibilities for it to get stability. The first one is that chlorine may releases 7 electrons to  gain the E.C of noble gases, same as [Ne] and become stable or gain 1 electron to obtain the E.C similar to argon [Ar]. It is obvious for chlorine to gain one electron and form a chloride ion. Other non-metals also tend to gain electrons this way.

Electronic configuration of chloride ion is:

How can I remember the difference between cation and anion?

Memorize the difference between cation and anion by the following mnemonic:

A cat has paws, which means cation is ‘paw’sitive.

What are the examples of anions?

The examples of anions are as follows:

What do metals form, cations or anions?

Generally, metals form cations. As they have a few numbers of electrons in their valence shell, they tend to lose electrons to obtain stability or a noble gases’ configuration. While sometimes, they also form anions by gaining electrons e.g. natride (Na–), Kalide (K–), Rubidide (Rb–), etc.

Does nitrogen form a cation or anion?

Nitrogen in diatomic form is electrically neutral. But in ionic form, nitrogen can either form an anion such as nitride (N3-), or a cation such as ammonium (NH4+).

Yes! As in the case of alkalides, metals such as sodium (Na), potassium (K), rubedium (Rb), cesium (Cs) can form a negative ion. These species are called Natride (Na–), Kalide(K–), Rubidide (Rb–), and Caeside (Cs–), respectively. These anions are stable in any compatible solvent as well as in a crystalline state.

Examples of cation vs. anion formulae: 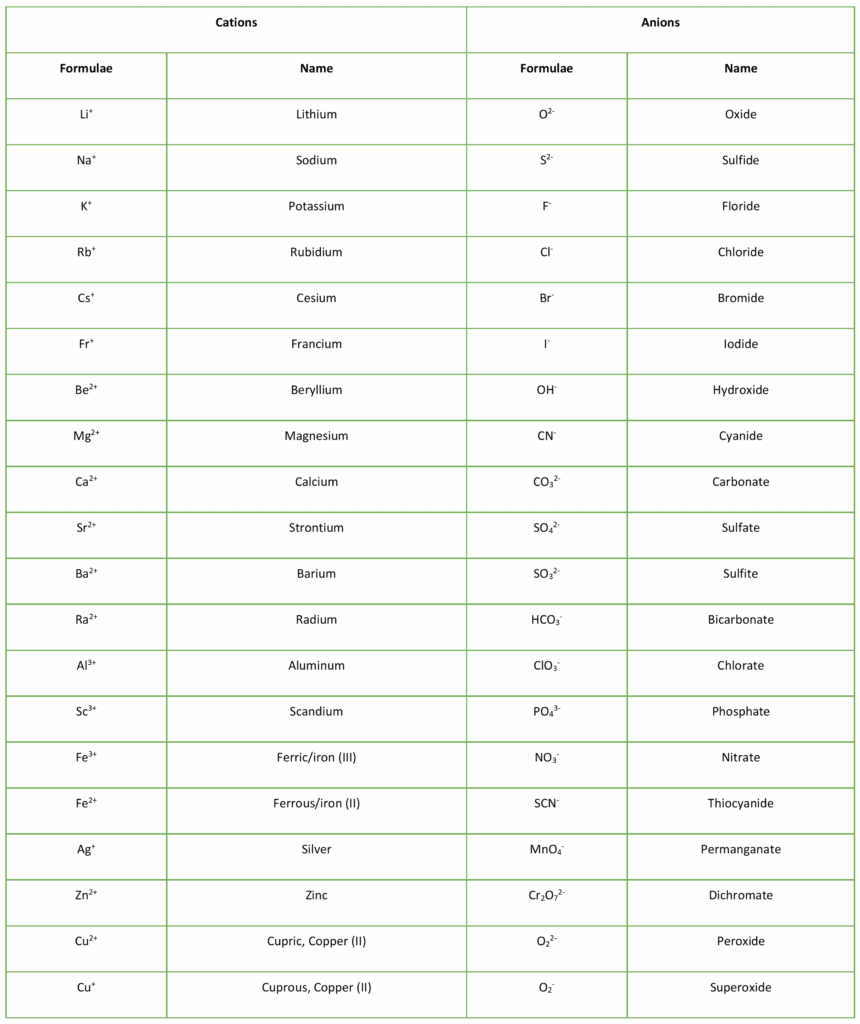 The cation and anion of the same neutral element are different in their sizes. In cation, electrons are lost from the valence shell, and there are fewer electrons, so it has a greater nuclear pull, resulting in a smaller size. In case of an anion, electrons are added to valence shell, so there are more electrons in valence shell resulting in decrease in the effective nuclear charge because of the repulsions between adjacent electron pairs. This results in the greater size of an anion than a neutral atom.

What is the polarizability of anions?

Polarizability is the extent to which the electron cloud of a molecule can get distorted. The polarizability of an anion depends upon the size and charge of the molecule.

The larger-sized and same charged anion has greater polarizability if the cation is the same.

Comparison of polarizability of halogens as anions is provided:

If the size of anions is the same, the greater charge has more polarizability.

This means that the lower charge density of an anion increases its polarizability.

What is the difference between ions and charge?

The difference between ion and charge can be summed up as:

The charge is the property of any matter by which it exhibits attraction or repulsion to any other charged field.

For example;  An electron or a proton can be termed a charge.

Ion is the unequal ratio of protons and electrons in an atom or group of atoms.

Are anions and cations present in plants?

Cations and anions are present in plants where they perform vital and life-running processes. Functions of some cationic and anionic ions in plants are provided below.

Pauling Scale: How to Use it to Calculate Electronegativity?